Call us and let us be part of the process Danish

Our profile is Danish.
But we are part of the Japanese YKK Group

YKK Danmark A/S is an independent company based in Denmark. We have been here since 1982 as part of the global Japanese YKK Group.

We are market leaders – in Denmark and abroad

We are one of the leading and preferred suppliers when it comes to zippers and fastening solutions. This didn’t happen by coincidence. With access to a global network of 111 YKK companies in 71 countries, we can produce orders exactly where it makes most sense for the individual customer.

For us, it’s not just about producing the best zippers and fastening solutions. It’s also about optimising processes. We don’t just deliver a product from A to B. We take the next step and enter into partnerships through the entire value chain. This means that global logistical solutions are also part of our working day.

YKK was founded in Japan.
But we are present in 71 countries

The YKK Group was founded in Japan in 1934 by Tadao Yoshida. The company was originally called Yoshida Kogyo Kabushikikaisha, which has since been shortened to YKK. The Group employs around 42,000 employees worldwide in 111 YKK companies in 71 countries.

YKK Group’s activities are divided into the following divisions: Zippers, snap buttons, jeans buttons as well as textile and plastic. The global activities from the divisions are distributed among six regions: EMEA (Europe, the Middle East and Africa), North and Central America, South America, China, Asia and Japan. This is done to ensure that all activities are based locally.

The philosophy of the Group

The YKK Group is based on Tadao Yoshida’s original philosophy:

This means that all YKK products must be produced of such high quality that they benefit or enhance the end product that they are a part of.

In order to live up to the philosophy of high quality in all YKK products, we not only produce all of our own products, but also the machines that the zippers and fastening solutions are produced by. Many of the raw materials that are used in the products are also produced in the YKK Group.

Our trademark is quality

Anyone can talk about making high-quality products, however, few actually live up to the promise like YKK does. Since the 1950s, we have gradually introduced quality control on all YKK factories all over the world. And in 1997 we established the “Fastening Global Quality Management Committee” (FGQMC) to ensure uniform quality worldwide.

Today, the role of FGQMC is to examine international rules and laws, testing and conducting quality assessment of new products, preparation of product specifications and other quality assurance activities. This work is done to ensure that the YKK Group always delivers the highest possible quality.

All primary YKK production facilities are ISO 9001 and ISO 14001 certified and most standard YKK products are Oeko-Tex 100 Class 1 certified.

Types of zippers and sliders
by function

Be at the forefront of development ... 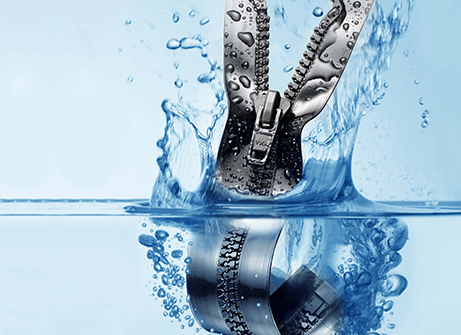 Be at the forefront of development - sign up for our newsletter